A lot of New Zealand children have been coming down with chickenpox, as evidenced by newspaper articles like this one from Otago Daily Times. Put the word, “chickenpox” in Google news, and it’s everywhere, even popping up in . . . vaccinated USA.

Chickenpox, which was once a rite of passage for all children, is still a normal childhood disease for many children.

But things are changing. Chickenpox parties are now considered a medical crime and the height of dangerous irresponsibility. Don’t be surprised if media is saturated with this GSK chickenpox advertisement.

Because . . . Glaxo Smith Kline’s chickenpox vaccine will be added to the New Zealand vaccination schedule in July 2017. On the surface that’s the only major change most parents will notice. Under the surface is a much bigger change. GlaxoSmithKline has achieved a monopoly of all childhood vaccines up to the age of 11.

Having scratched IMAC’s back for a very long time, GSK finally gets their payback. Both Nikki Turner and IMAC have been prolifically funded by GSK, as evidenced from Helen Petousis-Harris’ study funding over the years; Nikki Turner’s WHO SAGE committee conflicts of interest, and funding for the Research Review educational series. 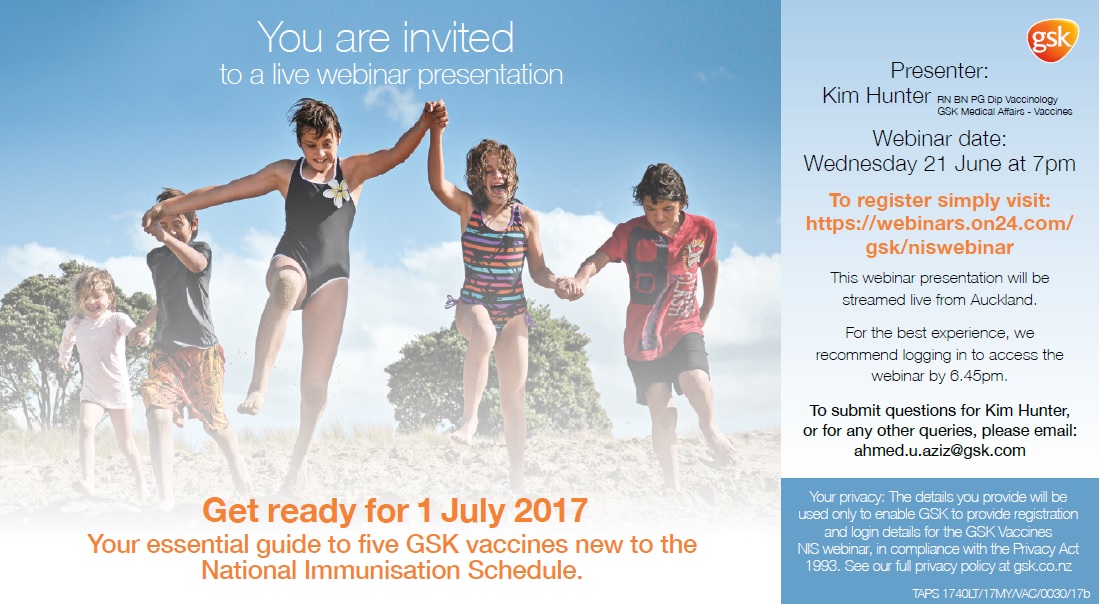 Of course, to provaxxers, GlaxoSmithKline funding the New Zealand provaccine forever and a day, and for a long time into the future, isn’t REALLY considered a conflict of interest. It is only a conflict of interest when parents pay for books written by anyone who points out history and medical literature which calls into question, vaccine propaganda. Ironic hypocrisy really.

Not that GlaxoSmithKline cares. They have got what they wanted. Almost a clean sweep of all childhood vaccines from 2017 will harvest shareholders, millions of taxpayer dollars.

So why has the Chickenpox vaccine been put into the schedule?

GSK has been touting this vaccine in New Zealand since 1995 as shown by this direct approach to doctors in 2004.

Notice how little information they gave doctors on the vaccine.

So for 22 years, some New Zealand parents have bought this vaccine for their children. The vast majority of the vaccinated children I knew still got chickenpox. The common parental response? “BECAUSE my children were vaccinated, they didn’t die”. Such is the power of brainwashing.

According to the recent Research Review Educational Series to New Zealand professionals, rising complications are the main reason for the introduction of this vaccine, because chickenpox has become a serious disease and therefore, parents’ perceptions of diseases should change.

In 2017, it’s a serious disease. In order to make parents vaccinate, they have to be scared of a disease, so you have to shift social perception, and that doesn’t happen overnight. A recent 2017 article about the Australian flu vaccine scare in 2010, showed that parents won’t use a vaccine if they don’t have a “high level of dread”.

Parents who aren’t in a state of dread, are able to think – to rationalise – that a disease that isn’t about to kill their child, doesn’t need a vaccine.

Most parents who have successfully home-nursed normal, mild chickenpox don’t consider it a big deal. So, you should expect to be told some really scary chickenpox stories on main stream media, to raise your level of dread.

And in that context, let’s be honest. Chickenpox, when treated the way the medical model recommends, can turn really nasty on you, which is provable from the medical literature.

Let’s look at how that came about.

An article came out in the Consumer magazine in 1995, which talked about a jump in hospital discharges for chickenpox complications in 1993. I rang the Ministry of Health Statistics services on 18th November 1995, and they told me that it might only be an artifact because in 1992, the definition of hospital discharge had changed to include any short stay of “longer than three hours”. Given the long waiting times in A&E even back then, you could now be labelled as “hospital discharged” for nothing at all.

That increase was prominently featured in a 1998 NZMJ article discussing the rationale for introducing the chickenpox vaccination in New Zealand.

But before that article, discussion for the vaccine was mainly centred on convenience for parents:

However, the 2017 ‘expert’ advice released to GPs, centres on the rise in hospitalisations which have increased considerably since then:

So the change in the criteria for Hospital admission isn’t responsible for all of the increase.

In my opinion, what started to increase the severity of chickenpox was the mindless recommendation to use fever-lowering drugs.

Even though there is NO EVIDENCE that bringing down a fever in an infected child, helps that child, it’s the reflexive go-to, which the medical system constantly recommends. Never mind that for decades, even the World Health Organisation has said that drugs which reduce infectious fevers increase complications and deaths. http://beyondconformity.org.nz/hilarys-desk/paracetamol-should-not-be-used-for-infectious-fevers-revisited

Why would ibuprofen be a problem? More to the point, could New Zealand’s Panadol (Pamol, paracetamol, acetaminophen) also be a problem? Why have parents become addicted to using acetaminophen drugs to reduce fevers, and every illness, cut and scrape?

Earlier I mentioned the old brochures provided by the then makers of Panadol, in the early 80s, to be handed out to parents by doctors.

These brochures were a partnership venture between Winthrop Laboratories, which made children’s Panadol elixir, and doctors. The purpose was to educate parents, who were “losing their familiarity with diseases and uncertain how to treat mild infections when they do strike”. The brochure simply replaced the old fashioned proper nursing with panadol, and was the start of a concerted drive to increase the use of acetaminophen products to treat fevers during infection, or “discomfort”. All through the 1990s, magazine articles about dying children often had small paragraphs like this 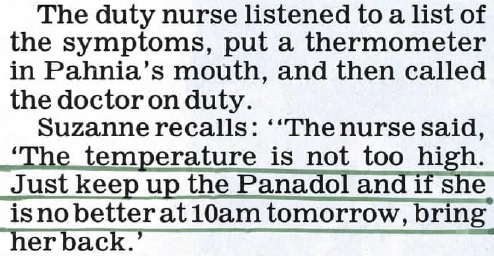 By the year 2000, newspapers were reporting that Pamol had become a social medication. After all it was touted as such a safe drug to be used for – well – anything really:

This was confirmed in a 2004 study and is a trend that continues to this day. Ironically, instead of blaming the drug manufacturers and the doctors who brainwashed the parents into using an unnecessary drug in the first place, now it’s the parents’ fault for being fever-phobic and self-medicating.

Currently the dogma is that only ibuprofen is linked with GAS, but is it just ibuprofen?

By 1989, it was already known that paracetamol prolongs the course of chickenpox, just as it prolongs the course of the flu, and the children taking paracetamol were also itchier. Why then, would doctors suggest Pamol? They just do. This is not an epidemic of advice solely caused by parents wanting to use Pamol as social medicine. Just like, “It’s just a little prick” used to be the mantra before injecting a vaccine, “Just give Pamol . . . ” is still the automaton response from medical people when it comes to dealing with the outward sign of the body’s own defense against invasion—fever.

In my opinion, if paracetamol can blunt the immune system, allowing chickenpox and other infections to last longer, then it could well do exactly the same as ibuprofen, and drive secondary bacterial superinfections deeper.

My paracetamol folders bulge with newspaper and medical articles showing how dangerous paracetamol is, and how it increases a whole host of serious childhood problems.

So why does the medical system not STOP parents using paracetamol for chickenpox, influenza, and other infectious fevers?

Do we have proof that ibuprofen is dangerous with chickenpox? Yes, by the bucket load. Take a look at Bryant just for starters. 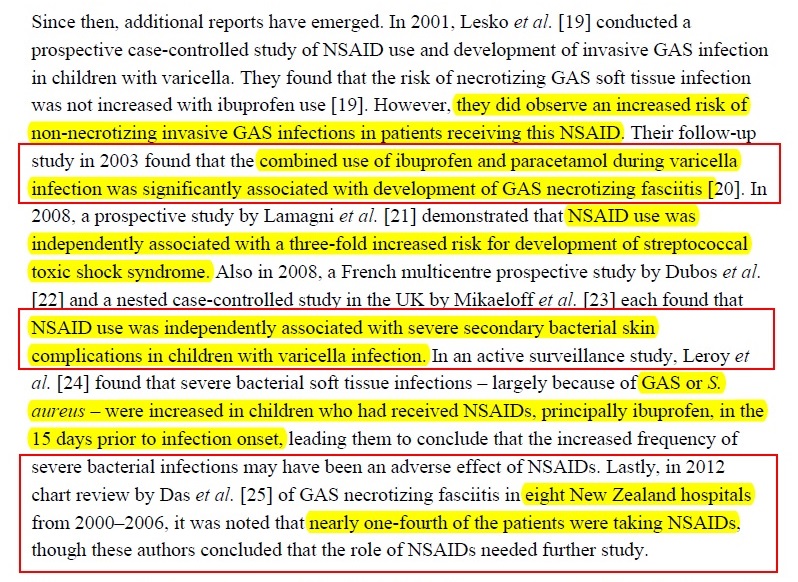 Even worse, if you use any NSAID and get GAS complications, You get hit twice because the NSAID reduces the effectiveness of antibiotics in fighting the infection.

But back to the new 2017 advice for doctors about VarilRix, the GSK chickenpox vaccine.

Before you read the advice to doctors, please read these three different Varilrix datasheets.

and the new Medsafe Varilrix 2016.

Print them out. Compare them.

Note that the 2016 data sheet REMOVED most of the side effects listed in the 2012, and 2014 datasheets. Notice that the 2004 advisory to doctors, also had almost no side effects.

Notice that in all of them, the efficacy data used is the same, though slightly different in the 2017 doctor advisory.

Notice also that the expert review got the vaccine components WRONG saying it had human albumin.

Here is what you should know:

1) 62% of people who have never experienced the pox, could already be immune.  People without a history of clinical infection should be tested before the chickenpox vaccine is given. (Holmes 2005)

2) The use of ibuprofen (and IMO paracetamol) for fever, by down-regulating the immune system, allows Group A Streptococcal and other bacterial infections to run rampant.

3) New Zealand doctors indiscriminately prescribe anti-virals, antibiotics and topical Fusidin. Has this also led to further expansion of various drug-resistant bacteria? After all, New Zealand has huge skin infection issues compared to the rest of the developed world.

5) Varilrix should only be given to healthy children? Please define healthy.

6) We know that various immune deficiencies in children, are on the rise, some of which aren’t detected in childhood.  Both the vaccine and infection could put those children at risk. Shouldn’t those parents be educated as to the risks that the current  medical advice for treatment imposes on the innate immune system of their children?

7) Why have the nasty side effects listed in the GSK Varilrix datasheets in 2012 and 2014 been removed from the 2016 GSK datasheet?

Chickenpox complications could have been prevented a long time ago if the real concepts about how to nurse children with chickenpox – how to prevent secondary infections, were taught, but they are not. A situation which suits the provaccine, because in 2017, how many parents would think to question medical advice?

Look at this from the Otago Daily Times:

The advice about baths every three hours, has possible flow-on effects, particularly if it involves soap, oatmeal, or anything which makes the skin pH alkaline. The skin immune system functions best with an acid pH (around 5.5) and with the skin’s own salt, which is a crucial cofactor to key immune system cells which fight bacterial infections.

When parents constantly put children with chickenpox in (oat) baths, they are diluting the microbiome into the bath water, spreading potential pathogens, making the skin alkaline, and opening wide the doorway for potentially serious GAS secondary infections.

Pink Calamine lotion with a ph of 10 is just about useless, should be called out for what it is. Quackery..

There are other, far more appropriate ways to treat chickenpox, that the medical model appears to have no idea about, but which I will not talk about here. After all, it’s bad enough questioning medical vaccine dogma and current treatment advice, without being also accused of practicing medicine without a license.

If parents question or refuse this vaccine, Professor John Fraser will no doubt roll out his go-to scientific “terrorists” label accusing parents of not loving their children.

If this vaccine has any reactions, they will be a coincidence non-disorder and any reactions will be denied as usual. Unless it’s a tinsy sore arm. That will be added to the SMARS database just to make it look like the Dunedin Centre for Adverse Reactions Monitoring is paying attention .

Another point not being discussed in the doctor advisory, is the fact that many children previously vaccinated with Varilvax, subsequently get chickenpox. One notable case known to me who had two chickenpox vaccines, recently had chickenpox for the third time.

Just before you say, “you can’t get chickenpox more than once!”, actually you can.

Repeated chickenpox is much more common than you would think. This study discusses four cases, and quotes other studies with similar stories including a study showing chickenpox in “apparently immune” patients. This study showed “sequential follow-up of their eight patients revealed one who became seronegative and two who lost cellular immunity and that some of them developed more than three episodes of recurrent chickenpox”.