Don't do something, stand there!

"Surprise: Scientists discover that inflammation helps to heal wounds".  Interesting headline, huh? Remind you of anything?  Like "Fever helps the body successfully fight disease, and using drugs to reduce fever, gives the infection the advantage." ??  So why did the medical mantra of treating sprains with RICE (Rest, Ice, Compression, Elevation), become so popular? Because the ONLY mantra acceptable to the medical profession, is, "Don't stand there, do something!"  It's never a question of "Should we?".  It's one of, "Can we? And if so, what?"  Researchers have finally caught up with people who have experienced the fact that ICING a sprain hurts it more, and leaving it alone heals it quicker. The body hates ice on a sprain, and it's is a stupid treatment.

Which leaves people like us in an interesting position.  It's not easy being the only geek on the street who doesn't reduce infectious fevers with drugs, or slap ice on "stuff".  We've found out that it's no use asking people who repeat the system's mantra of RICE and PAMOL, to tell us where both these treatments began. You get the incredulous look, which turns to scorn, as you're told that 'everyone' knows "that's the right thing to do".

FACT: Neither treatment was based on functional biochemistry, functional intelligence, or a function understanding of healing.  Generally, when we see other people employing these sorts of treatments, we just shut up.  After all, it's not our kid.  And somehow, we have to survive.  How unpopular can you make yourself?  Wasn't it bad enough that we'd had a home birth, exclusively breastfed for longer than normal, homeschooled both the kids, didn't vaccinate, refused antibiotics, understood home nursing, and fed them as well as we could within the bounds of kids who viewed brussel sprouts as the equivalent of medieval torture?

I guess most people assumed that both medication to reduce fever and ice to "heal" sprains was evidence based science.  Neither assumption is true. However, we suspect that icing of sprains will be easily dropped from the mantra manual. The only collateral damage of this new thinking is injury to professional pride! Because fever reducing drugs are highly profitable, getting that deleted will be near impossible.

The point is that the Eurekalert news release above is based on the first official study looking at how injured muscle heals. And yet again, it turns out that our bodies have within them, all the software and bullet-pointed systems designed into a step-wise process, to tell the body how to correctly to heal anything which involves inflammation.  Which leads to the question as to why the medical profession thinks it is more intelligent than our body's fix-it manual.

Bags of peas and corn were only used medicinally for one thing in this house, and that was heatstroke. But that's another story.  The Herald reproduced this item this morning. 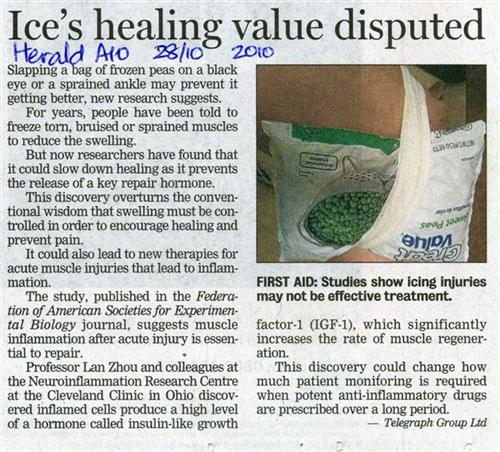 If you read this item in one hand, with Jerome Groopman's book "How Doctors Think" in the other hand, perhaps you'll start to see why medical history (about which you were taught nothing in school), reads like a serial time line in which "authoritative experts" have been able to get away with the perpetration of one "authoritative" nonsense after another.

We see so many people around us, dealing with problem after problem, which to our eyes, are a result of misplaced faith in a medical system which either has no answers, or sometimes provides wrong answers which simply compound the problems.  The result is fearful parents, who have no confidence in themselves as parents, or their own body's ability to "do" the job it's designed to do.

It can be a lonely place, educating yourself enough so that you become confident in your ability to parent or look after yourself, without constant reference to human 'experts'.  But we have found that loneliness can simply be another 'adversity' which gives us all the more incentive to research issues, and sniff out what's worth doing, and what isn't.  And...to know why!